Our research theme is Computational Forensics(CF). CF requires joint efforts by forensics and computational scientists with benefits to both. To complement the lack of knowledge among forensic and computer experts, we collaborate with forensics domain experts(from the University of Yamanashi, etc.). The goal of “Computational XXXX” is to realize the intellectual activities that human beings originally wanted to do using computer graphics(CG) and computational resources.

The essential thing in forensic science is to justify the severity of the crime. CF can numerically quantify how much malice the attacker harbored when he attacked the victim, the concept of “malice index.” Malice index would be a quantitative indicator, tailored specially for the jury, calculated from the severity of injuries or other factors such as the angle of the blade. Besides, it also could be used to compare with past precedents to determine the appropriate punishment. In our opinion, this is one of the CF ways forward.

We are developing efficient user interfaces for investigations, forensic analysis, and sentencing in court, with the concept of x-LMML.

Forensic science holds a unique position among all other disciplines due to its important social implications—lying at the intersection of medical science and legal science. Indeed, forensic autopsy reports, which systematically describe autopsy findings, are imperative both for legal medicine and courts. Typically, they are created by medical examiners (MEs) collaboratively working with diagnostic radiologists (DRs). The forensic autopsy reports also serve as underlying legal documents in judicial trials for engaged judicial personnel (JP). A challenging issue is to provide an efficient common computational environment for the MEs and DRs as well as JP. We elaborate on the issue from the viewpoints of legal medicine and courts.

Legal medicine. The fundamental works of MEs and DRs are physical autopsy (PA) and virtual autopsy (VA), respectively. Authoring and referencing are involved in their works. For authoring, dictation and text generation accompanied with diagnostic imaging are commonly used both in PA and in VA. These methods are error-prone for documentation, interaction, and illustration of the autopsy results. As for current referencing, MEs use anatomical worksheets (considered time-consuming) to refer to DRs’ work, while DRs use 3D surface imaging of corpses (requiring expensive equipment) to refer to MEs’ work. Therefore, an efficient way needs to be devised for MEs and DRs to acquire and compare autopsy findings.

Courts. The primary goal of the MEs and DRs is to document comprehensible and reliable autopsy results efficiently, which are then reviewed by various kinds of JP (including investigators, prosecutors, judges, and juries) to generate their own court documents. However, existing autopsy reports are cumbersome for JP (and even for MEs and DRs) to reuse. One reason for this is the lack of spatial inference among autopsy findings, and another is the use of difficult technical terms in forensics.

In our prior research, a browser with authoring tools using a language called legal medicine markup language (LMML) is presented. The proposed prototype assists MEs in effectively generating PA reports, but the research is not targeted at VA reports nor the court documents. In this work, we attempt to address the aforementioned issue by extending the prior research and presenting an integrated visual analysis environment named FORSETI—forensic autopsy system for e-court instrments. The FORSETI system is designed to have two technical essences. The first is to be designed on the basis of an extended version of LMML (x-LMML) to encompass from PA to VA in authoring integrated electronic autopsy (e-autopsy) reports. The second is autopsy juxtaposition, which improves the reliability and efficiency of the autopsy by helping MEs and DRs refer to each other’s findings. A fictitious case with the Visible Female Dataset is used to demonstrate the effectiveness of an initial prototype of the FORSETI system. 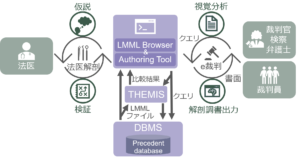 THEMIS (Theotretical Estimation of Meaning of InSults) as a sub-system of computational forensics, It is used to stakeholders for analyses and presents similarity between photographs recorded in LMML files.

The mathematical model of meaning is a method proposed by Professor Kiyoki et al., who is the local of this project, to calculate the semantic similarity and described in 1995 SIGMOD Record. For example, the word “green” has multiple meanings associated with it, but considering that it is a “road”-related context, “green” means “go” It is possible to show that it is close to Furthermore, not only for documents but also for multimedia, it is possible to calculate the semantic similarity regardless of modal by extracting the semantic elements possessed by the content and applying meaning.

Back to AV team page